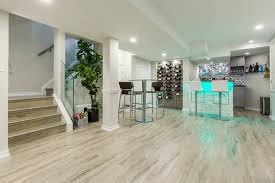 What are the Best Ways to Avoid Any Problems with Having a Finished Basement in Toronto?

The decision to finish a basement in Toronto isn’t always an easy one. Doing a major basement renovation can involve the commitment of tens of thousands of dollars, not to mention a great deal of time and effort. When having a renovation done, what are the best ways to avoid any problems after the job is done? Here are the best approaches to making sure that there aren’t any post-renovation headaches after having a basement finished:

Make sure to have the basement properly insulated. This is something that a lot of people don’t even think of when it comes to having a basement finished. The fact of the matter is that Toronto gets cold during the winter and every basement should be properly insulated to ensure that there aren’t any future issues with heating the house.

Having high heating bills start to come in after finishing a basement can involve spending more money and undoing some of what was done during renovations. As a result, it’s better to insulate as part of the renovation.

Ensure that all proper permits are obtained. A contractor will usually do this, but it’s a good idea to at least ask the question before work begins. If taking a more hands-on role with something more DIY, then it’s really important to do proper research on the subject beforehand. Toronto, like most other major metropolitan areas, require building permits even to finish a basement, so make sure that it’s taken care of.

Not bothering to get the proper permits can result in major headaches after the work is completed in forms of major fines from the city or worse: they can force a situation where the work has to be completely redone!

Realize what DIY really means. Finishing a basement by yourself is a major commitment requires a great deal of time and effort to accomplish. Yes, it can also mean saving money, but everyone has to weigh the benefit of reduced costs to what can happen after the renovation is done.

If a basement renovation isn’t done properly there can be long-term repercussions of a DIY project. The least of these problems can be discovering that the renovation wasn’t quite as perfect as you had hoped. This is an inconvenience, but the real issue could be discovering a major flaw in the renovation afterward and having to call in professionals to repair the problems.

Always hire a contractor. The best way to avoid problems after the project to finish a basement is done is to make sure that it was done properly in the first place. A good contractor guarantees their work and agrees to a reasonable price for the project beforehand. Yes, there can be cost overflows if there are problems with the house the no one knew about, but those issues would be encountered regardless of who does the work.

Because of this and so many other issues that can pop up during a renovation, it’s usually in everyone’s best interests to hire a professional contractor.

A Guide to Home Security in Canada →